I take a keen interest in current affairs and regularly watch Newsnight and Question Time, two flagship programmes broadcast by the BBC which provide a forum for experts to debate key issues of the day. It always strikes me as odd that despite the UK’s rich diversity, particularly in London, the media heartland, that this diversity is hardly ever reflected on these two flagship programmes.

Looking specifically at people of African and Caribbean heritage, my mum tells me of a bygone era when, shocked that there was a black person on TV screens, she would call my dad and siblings to ‘come and see, there is a black person on TV’. Though I have referred to this as a bygone era, I’m not actually sure that this is the case. When I do see a black person on Newsnight or Question Time, I find myself wondering who it is and what topic they are discussing because it isn’t embedded as a regular experience that is part of my consumption of current affairs on ‘mainstream’ television. In 2014 it isn’t the norm for me to expect to see a black person on Question Time or Newsnight. Furthermore, when I do happen to see a proliferation of black people on said programmes, there is a high probability they will be discussing what are perceived to be ‘black issues’; usually in relation to a negative social phenomena such as gangs. I remember this particularly well during the 2011 UK riots.

It would be logical, given the lack of representation, that people may start to think there are very few black experts or commentators that can speak about politics, current affairs or science and the like. Of course this is not the case. It seems obvious, yet in 2014 the obvious must still be stated.

So is this just another call for quotas?

It is worth referencing Lenny Henry’s campaign, which is explained in more detail via the video below, calling on quotas to ensure better representation of Black and Minority Ethnic groups across the TV industry.

What I am calling for is inclusive and responsible broadcasting that engages the many and not the few. It’s a call to engage diverse ways of thinking, which in turn enable people to be better informed about the world around them. I regularly join Arise News as a commentator, where I discuss topics ranging from international affairs to politics. And that’s not all. I am always joined by at least one other black person. 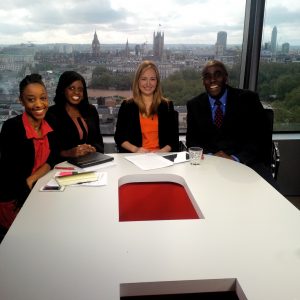 The panel on Arise News with host Phil Gayle.

The studio is based in central London and the producer has no issues in finding people; a point which is sometimes raised as a reason why we don’t see more black people in the role of experts or commentators on prime time TV. Producers revisit contacts who are known to them because it’s easier, less time consuming and they know what to expect from said individuals. However, there are wider social implications of this approach: it limits the accessibility of those who are outside the producers’ circle of influence.

If Arise News can do it, why can’t Question Time or Newsnight?

It’s worth mentioning that Arise TV has set out to champion the voices of emerging and frontier markets. However, there is absolutely no reason why we cannot expect to see a more diverse pool of experts and commentators on Question Time or Newsnight. There simply has to be a willingness to look beyond the usual ‘little black book’ in order to engage new faces and new talent. It’s not rocket science and, if the willingness is there, quotas do not even need to come into the equation. However, one only has to look at Lenny Henry’s campaign video (above) to understand the path leading to engagement is fraught with barriers. The Telegraph reports that staff from the BBC are undertaking training to help them better understand the impact of ‘unconscious bias’, thereby reducing the aforementioned barriers.

I am looking forward to a time when I am no longer surprised to see a black person on Question Time or Newsnight discussing a range of topics. I hope this time is sooner rather than later. Black experts and commentators (and from a many other under-represented and diverse backgrounds) are out there in abundance; producers just need to be willing to find and engage them.