It may be  relatively premature, given that I have only been a presenter at Croydon Radio since its inception in July, but the ‘Croydon North by-election special‘ is one of the best things I have broadcast. 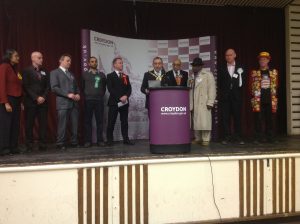 Candidates waiting in anticipation for the results of the Croydon North by-election, also broadcast live on Croydon Radio.

The idea to host the show was borne out of my keen desire to provide a forum for the people of Croydon North to have an opportunity to make a more informed decision about who they want to represent them.

Edelman’s Trust Barometer, which provides an annual overview of levels of public trust in key institutions, and was published earlier this year, highlighted that our trust in politicians is declining. A lack of trust can lead to disenfranchisement or apathy, leading some to feel like their voice (and vote) is meaningless.

Now more than ever, politicians need to find new ways to engage with the public, particularly at a grassroots level. As a community radio station that is run by the people and for the people, Croydon Radio is a good vehicle for this engagement.

The Parliamentary candidates hoping to be the next MP for Croydon North did not fail in their efforts to engage and ‘pitch’ their offering to listeners. Far more telling than a glossy campaign leaflet or a spat on twitter, the Croydon North by-election special on Croydon Radio provided an opportunity to understand more about what makes each candidate tick and their suitability to represent a community whose previous MP, Malcolm Wicks, was held in such high regard by his constituents and across the political spectrum for 20 years.

The discussion between Winston McKenzie from UKIP and Marisha Ray from the Liberal Democrats certainly made an impression on Lester Holloway, who wrote about their exchange in his blog. Likewise Anne Giles, who listened to the podcast of the show, expressed her thoughts about the exchange between Steve Reed from the Labour Party and Andy Stranack from the Conservative Party in her blog.

Engagement is crucial in this by-election and, as such, each candidate needs to invest heavily in engaging effectively with potential voters in Croydon North. Some, like Lee Jasper from the Respect Party, have utilised the power of social media and humour to engage voters in an ‘innovative’ way.

When party politics, gimmicks, twitter spats, mudslinging, ego trips and the glitz and glamour of the campaign come to an end on 29 November, Croydon North residents will be left with the most important question: which candidate and party can represent the needs of their community and who is the most authentic, consistent and relevant?

I am looking forward to the Croydon Advertiser’s by-election debate taking place on 20 November. Again this will provide a valuable forum for people to get to know more about the candidates and what they stand for.

Let’s all keep engaged and play our part, particularly the residents of Croydon North during this by-election period, to make sure that our voice is heard and our vote counts.